Jack Bain's Bar
The newly redesigned Jack Bain’s Bar at 137 Pillars House is already making waves and receiving rave reviews from guests and visitors. It is fast becoming THE place to go in Chiang Mai for craft colonial and Asian inspired cocktails, premium whiskeys, sabered champagne and bespoke spirits which can be enjoyed in a nostalgic, historical atmosphere that harks back to the golden age of cocktails and gentlemen’s clubs.

Legend
Jack Bain was one of the last inhabitants of the historical teak homestead around which 137 Pillars House was created many years later. The homestead dates back to the late 1800s when it was the headquarters of the colonial Borneo Company. Jack followed in his father William’s footsteps and joined the company as Manager, raising his family on the grounds where the hotel now stands.

A colourful Scottish character somewhat reminiscent of Indiana Jones, his legend lives on in the bar named after him which will become a feature in each of the 137 Pillars Hotels & Resorts’ properties; coming soon to Soi 39 in Bangkok with the opening of 137 Pillars Suites in April.

Jack’s youngest daughter still lives in the area and has very kindly shared anecdotes and memories of her beloved father which are incorporated into the bar’s menu of tempting cocktails and concoctions which has been designed in the form of his personal diary.

Formerly a lounge and library area, the Jack Bain’s Bar is now an elegant, chic cocktail lounge where guests and visitors can relax, read, play backgammon or catch up and share their exploits and adventures of the day and mingle with other guests and visitors from around the globe.

Signature Cocktails and Irresistible Concoctions
An irresistible bar menu will never let you stop at one and K. Sombat, the charming and charismatic Bar Manager will guide you through the enticing menu of classic, contemporary, traditional and signature cocktails, or create a personalized concoction according to your preferences. A selection of tasty bar bites will also tantalize your taste buds.

Whether for pre-dinner drinks, a nightcap or just leisurely drinks, Jack Bain’s Bar is THE place in Chiang Mai to soak up history, celebrate and relax in ultimate style.

The tropical gardens can be seen through the traditional slat windows; adding to the colonial ambiance. Exquisite concoctions and cigars can be enjoyed on the surrounding terraces.

Distinctive Design
The bar was conceptualized and designed by Julian Coombs of Coombsassociates in Bangkok. Julian worked closely with the 137 Pillars House team to create and define an experience that would create a timeless elegance representative of the era of Jack Bain’s services to the Borneo Company, the Kingdom of Thailand and the British Empire.

In sourcing the right materials to balance both colour and light with the richness of the existing aged golden teak architecture, Julian used copper sheet and leather, widely traded throughout South and South East Asia at the time. The warmth and softness of these materials created a cozy, intimate entertainment area. Minimal disruption was made to the existing architecture and the addition of cut glass mirror further enhanced the ambiance. Two existing grand cabinets were adapted into liquor lockers for member guests; each locker being copper meshed and backlit. 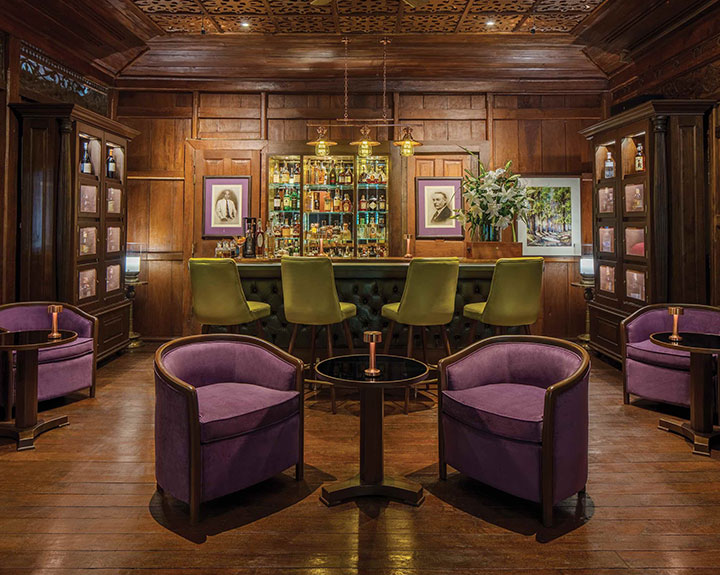